Flaky Sourdough Pie Crust filled with warm cinnamon-spiced apples that are tender and not mushy. Baking an apple pie from scratch may seem intimidating, but my easy, no-fail sourdough crust makes the challenge a bit easier.

There are few things that feel nearly as special as a freshly baked apple pie. The first time I had a homemade apple pie was my first holiday after emigrating from the Philippines. One of my aunts was a wiz at baking all things, and she made the most delicious pies. Freshly baked Apple Pie still reminds me a bit of that first holiday season in America, my new home.

With fall quickly approaching and apples now in season, I thought it was the perfect opportunity to finally give one of my favorite desserts a sourdough twist. So excited to finally bring you guys my recipe for Apple Pie with Sourdough Crust in partnership with Imperial Sugar.

This Apple Pie with Sourdough Crust recipe is the second in my Recipe Box Series with Imperial Sugar. Each month, I’ll be releasing recipes for classic bakes made with a sourdough twist! You can look forward to comforting classics like Sourdough Fudge Brownies, Strawberry Shortcake, Glazed Doughnuts and many others.

Sugar is such a vital part of every dessert, it imparts flavor, texture, moisture, and without it, it would be impossible to make our favorite bakes. I’m so grateful to Imperial Sugar for making the Recipe Box Series possible and so proud to be partnering with a company with such a long tradition of producing such high-quality products. Imperial Sugar products are 100% pure cane sugar, non-GMO and provide consistently delicious results.

The secret to a flaky pie crust

As a breadmaker, I can be a bit heavy-handed with my dough which can be disastrous for pie crusts. Pastry is truly a science, it needs the perfect ratio of fat, flour and moisture and requires a very light touch or it will bake up tough and dry.

I struggled with producing perfect pie crusts for years until I discovered the secret to full-proof pastry: folding. Folding (laminating in pastry terms) creates layers of butter in your dough. It’s the same technique used for puff pastry and croissants. This method is less complicated and cumbersome and just adds one more extra step to your pastry process. Once you’ve brought your dough together, you’ll fold it at least two times. This will envelope butter layers in your dough, creating tons of tender, flaky layers.

Since you’ll be handling your dough quite a bit more than regular pie dough, you’ll want to make sure you keep it cold. Start with really cold butter and cold flour, if possible. If your butter looks like it's starting to melt or your dough starts to feel sticky while you’re laminating it, stop working it immediately, wrap it up and chill it in the refrigerator for 15 minutes before continuing.

A crumbly pie, with a soggy bottom is one of the worst baking disasters. After hours of laboring on a pie, it’s truly heartbreaking to slice into a pie that falls apart with a hard and dry crust. While my extra flaky pie crust largely prevents this, as an extra layer of precaution, I add a layer of Old-fashioned Oats to the bottom of my pie crust. It’s a really handy trick I learned from the great Anna Olson. The oats absorb the excess moisture from the apples and since they don’t have any flavor they are totally undetectable in the baked Apple Pie. If you don’t have any oatmeal in hand, crushed Graham Crackers or Vanilla Wafers also work wonderfully. 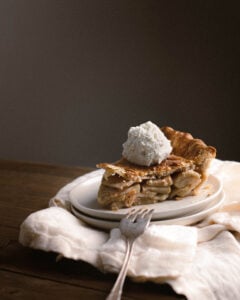 Make It Dough
Warm cinnamon-spiced apples that are tender, not mushy, with a buttery flaky sourdough pie crust. Baking an apple pie from scratch may seem intimidating, but my easy, no-fail sourdough crust makes the challenge a bit easier.
No ratings yet
Print Recipe Pin Recipe

Enjoy: It may be hard to resist the aroma of freshly baked apple pie but letting your apple filling set is essential or your pie slices may fall apart. Let your pie cool for at least 3 hours, ideally overnight before serving.  Serve the pie with a dollop of whipped cream or a scoop of vanilla ice cream.  Store: Tent the cooled pie loosely with aluminum foil and store at room temperature for up to 3 days. Reheat pie slices in a 400F oven for 10 to 15 minutes or until it’s warmed to your liking.
Did you make this recipe?I'd love to know! Rate this recipe and leave a comment below. Share a photo and tag @makeitdough on Instagram

the creator of Make It Dough. I'm a home baker, just like you, who is obsessed with sourdough and its many wonderful uses. I'm so glad you're here!